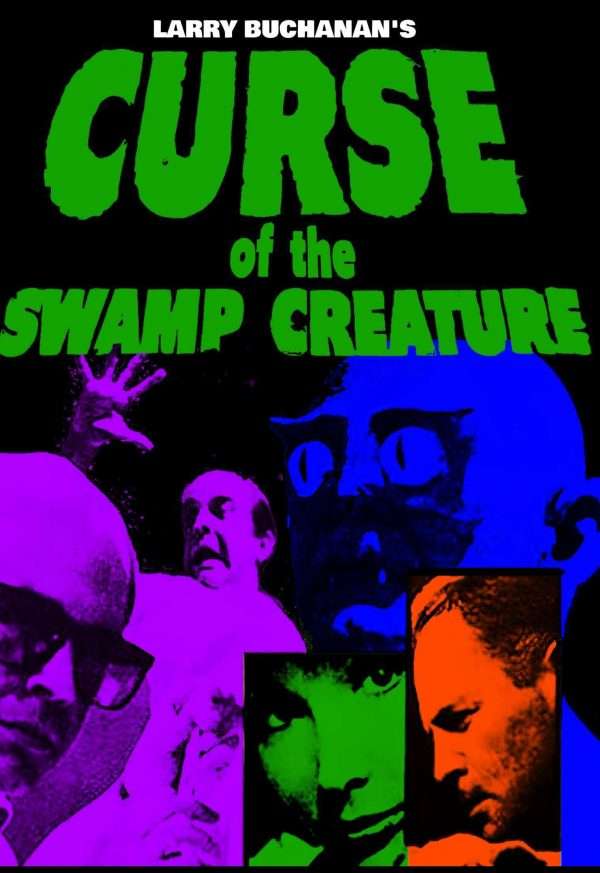 Curse of the Swamp Creature is a 1968 American-made for television horror science fiction film directed by Larry Buchanan. Although Buchanan was producing low-budget 16mm color remakes of American International Pictures sci-fi movies for television distribution around this time, he claimed this was an original even though it bears more than a few striking similarities to the 1957 AIP film Voodoo Woman.

Buchanan later said, “never make a swamp pictures. Your film comes back, and it’s all… strange.”

Deep in the rural swamps of Texas, the reclusive and ruthless wife-abusing mad scientist Dr. Simond Trent is conducting experiments in his laboratory on the local impoverished voodoo-worshiping black “natives” in an attempt to discover the secret to reversing evolution, feeding the failures to the alligators he keeps in his covered outdoor swimming pool. When a party of oil surveyors comes upon his isolated yet strangely suburban-style home, he decides to take the final step and turn the duplicitous female leader of the expedition into a grotesque and virtually indestructible amphibious “Fish Man” so that he can take his revenge upon the world.

Despite showing the monster very prominently on the posters of the film, which bill it as an “underwater terror from another age,” other than a brief, partial glimpses down into the mist-filled glass tank where its body is being modified from its original human form, the titular creature (with its burly physique, bald head, Spock-like ears and protruding slit-pupiled, ping pong ball-shaped eyes) only appears at the climax of the film for less than five minutes before meeting its demise, and no scenes take place underwater.

The movie was filmed in Uncertain, Texas, where the Fly-N-Fish Lodge and Airport seen in early scenes still exists.

The film re-uses Ronald Stein‘s previous music from both It Conquered the World and Invasion of the Saucer Men.

Curse of the Swamp Creature has received predominantly negative reviews. Writing for AllMovie, critic Robert Firsching described the film as a “low-budget horror oddity” and a “forgettable trifle [that] will be of interest to genre completists only.” Describing Jeff Alexander’s performance as “so maniacally over the top that he’s almost fascinating to watch,” critic George Reis wrote that the film “defines schlocky cinema as an art form in every way possible – from lousy acting, to shoddy camera set ups, to an array of unintended laughs and a disappointing monster.