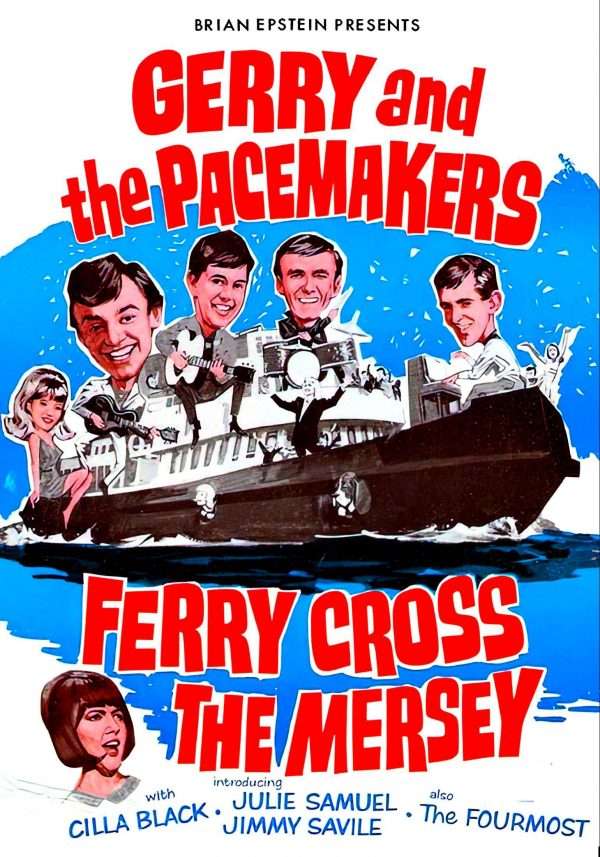 Ferry Cross the Mersey is a 1965 British musical film featuring Gerry and the Pacemakers. It is frequently considered to be their version of the Beatles‘ A Hard Day’s Night.

The film shows the story of art students Gerry and Fred Marsden, Les Maguire, and Les “Chad” Chadwick as they humorously try to navigate the Liverpool beat scene. After Gerry’s girlfriend Dodie (Julie Samuel) helps the group enter a music competition, their instruments are misplaced but are ultimately found in time for them to take the stage and win the contest.

After Gerry and the Pacemakers’ successful 1964 trip to America, manager Brian Epstein toyed with the idea of creating a film for the band. Tony Warren, creator of the soap opera Coronation Street, was hired as writer; he came up with a plot involving the band and ferryboats.[4] Writer David Franden was hired in his place when Warren proved unable to complete a script despite “downing bottles of whisky”.[5]

The movie was filmed over the course of three months under the direction of Jeremy Summers. For authenticity, many scenes were shot near the home of Gerry and the Pacemakers’ frontman Gerry Marsden. These locations included the Mountwood ferry on the River Mersey, the Albert Dock, The Cavern Club, Frank Hessy’s music store, and the Locarno ballroom. A collection of location stills and corresponding contemporary photographs is hosted at reelstreets.com.

The soundtrack was released the same year; Marsden wrote nine new songs for the film. Cilla Black is also featured with her song “Is it Love?”, along with the Fourmost with their track “I Love You Too”. The album is rounded out with an instrumental by the George Martin Orchestra.

Since its theatrical release, Ferry Cross the Mersey has never been shown on British television, nor was it released on video.