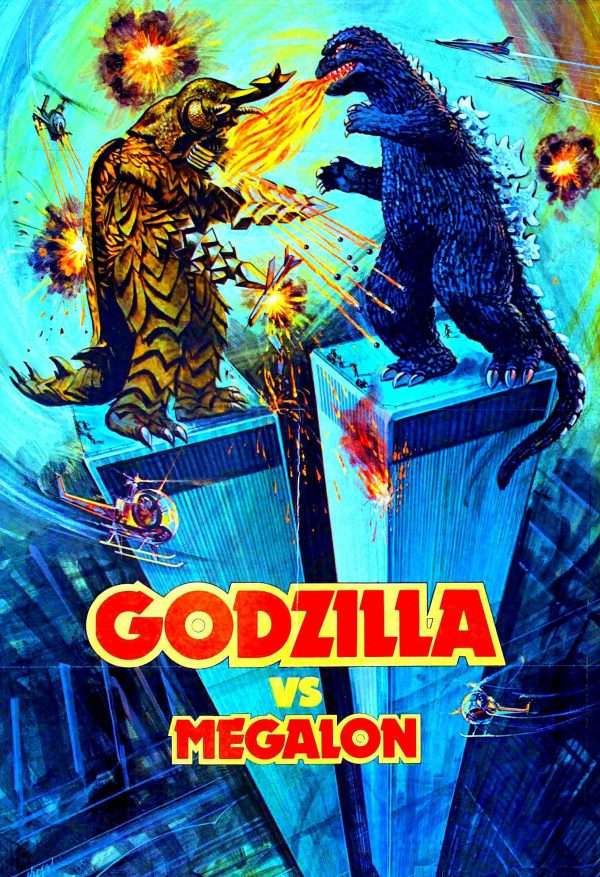 Godzilla vs. Megalon (ゴジラ対メガロ, Gojira tai Megaro) is a 1973 Japanese kaiju film directed by Jun Fukuda, written by Fukuda and Shinichi Sekizawa, and produced by Tomoyuki Tanaka, with special effects by Teruyoshi Nakano. Distributed by Toho and produced under their effects subsidiary Toho–Eizo, it is the 13th film in the Godzilla franchise, and features the fictional monster characters Godzilla, Megalon, and Gigan, along with the mecha character Jet Jaguar. The film stars Katsuhiko Sasaki, Hiroyuki Kawase, Yutaka Hayashi, and Robert Dunham, alongside Shinji Takagi as Godzilla, Hideto Date as Megalon, Kenpachiro Satsuma as Gigan, and Tsugutoshi Komada as Jet Jaguar.

Godzilla vs. Megalon was released theatrically in Japan on March 17, 1973. It received a theatrical release in the United States in the summer of 1976 by Cinema Shares.

Cinema Shares gave Godzilla vs. Megalon a wide theatrical release in the United States and launched a massive marketing campaign for the film, along with the poster, buttons with one of the four monsters’ faces on them were released. Given away at theatrical showings was a comic that told a simplified version of the film, which incorrectly named Jet Jaguar as “Robotman” and Gigan as “Borodan”. These incorrect names were also featured in the U.S. trailer.

Initially, Cinema Shares screened Toho’s international English version but to ensure a G rating, several cuts were made, which resulted in the film running three minutes shorter than the original version.

Godzilla vs. Megalon is the first Godzilla film to receive an American prime time network television premiere, where it was broadcast nationwide at 9:00 PM on NBC on March 15, 1977. However, to accommodate commercials, the film was only shown in a one-hour time slot, which resulted in the film being cut down to 48 minutes. John Belushi hosted the broadcast where he did some skits, all in a Godzilla suit.

Mel Maron (who was president of Cinema Shares at the time) chose to release Godzilla vs. Megalon because he saw Godzilla as a heroic figure by that point and felt the timing was right to show children a hero who was a friendly monster and not Superman.

The U.S. rights for the film eventually fell into the public domain in the late 80s, which resulted in companies releasing poorly-cropped, fullscreen VHS tapes mastered from pan and scan sources.