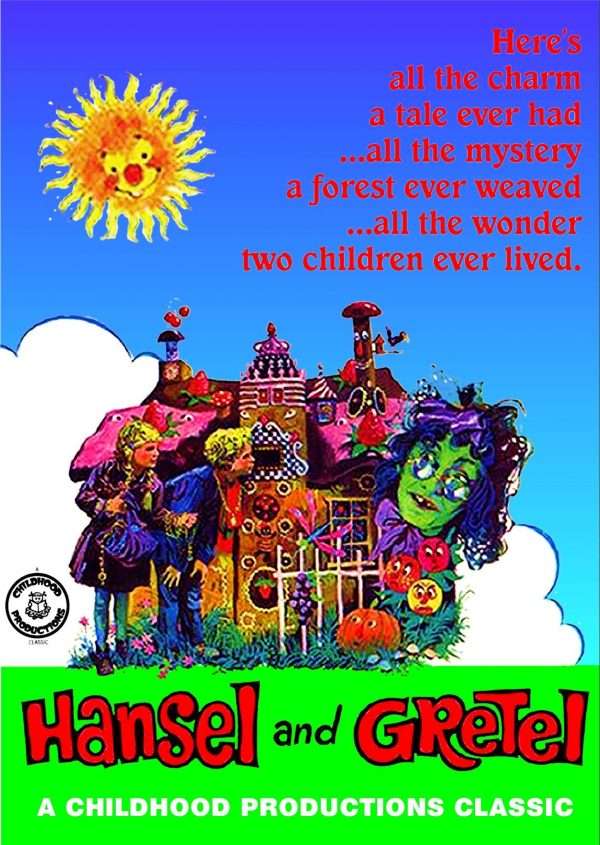 This spare but pleasant telling of the beloved fairy tale avoids the stark reality of the Fritz Genschow version, and lacks the whimsy of the 1954 puppet-animation classic by Michael Myerberg, but might be called the most balanced telling of the tale.

The film takes place entirely on nicely-designed studio sets, both colorful and attractive. The cast is all affable and lively. Sadly, Paul Tripp’s breathy narration consists of one sentence at the start and one at the end.

In a subplot added to pad the thin storyline, the children build a snowman. (Similarly, in Fritz Genschow’s HANSEL AND GRETEL, much time is spent with the kids’ puppet-maker pals, Michael and Helen, at the village marketplace.)

The snowman, an interesting man-in-suit creation, comes to life every so often, lending the film a pleasant fantastic touch.

The studio-forest, covered in fake snow in moonlight, is quite evocative.

The Gingerbread House is quite a magnificent piece of studio set design, virtually expressionistic in its clever compression of space and perspective, a marvelous collage-in-relief of bright colors and fun shapes.

The witch is fairly phantasmagoric, with a raven called “Satan” (an odd dubbing choice). Inside are strange puppets and other animated creatures, many of them suggesting various faces of death. Furniture runs around the house via crude stop-motion animation.

The witch spends a great deal of time preparing potions with various chants, lending this version of the fairy tale a more occult flavor than other incarnations.

After killing the witch, the children locate a treasure trove in a secret cellar, a plot point which is missing from the original fable. They access this storehouse of bounty via a very cool and surreal stairway which descends into a creepy black void.

Though this was billed as “a musical fantasy,” the film boasts a mere two songs (penned by Anne & Milton Delugg), each less than a minute long (“The Most Important Thing is Love” and “Mr. Moon Above”). The soundtrack album to the feature, released by Golden Records, had virtually the whole movie soundtrack on it!

One of the first releases from Childhood Productions, sent out on a cool double bill with THE BREMEN TOWN MUSICIANS), this and other early CP hits did well during the kiddy-swamped mid-’60s.

All in all, HANSEL & GRETEL is an entertaining, charismatic fantasy, with many effective elements. Of the Childhood Productions and Murray release version, it’s impossible to decide which H&G; is the better film, as we are terribly fond of each, and consider them as different as night and day. It just goes to show that if you give a good story to two good filmmakers, you will likely end up with two good films which don’t resemble each other in the slightest.