DISORDER IN THE COURT

Disorder in the Court is a 1936 short subject directed by Preston Black starring American slapstick comedy team The Three Stooges (Moe Howard, Larry Fine and Curly Howard). It is the 15th entry in the series released by Columbia Pictures starring the comedians, who released 190 shorts for the studio between 1934 and 1959.

Disorder in the Court was filmed over six days on April 1–6, 1936. The film title is a play on the stereotypical judge’s cry, “Order in the court!”

A colorized version of this film was released in 2006 as part of the DVD collection “Stooges on the Run.”

Sol Horwitz, the father of Moe, Curly, and Shemp Howard, makes an uncredited appearance as a member of the public audience. 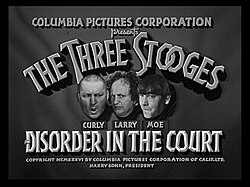 This is the first Stooge short in which Curly is spelled “C-U-R-L-Y” in the opening titles instead of the previous “C-U-R-L-E-Y.” The title card also has the Stooges inverted reading from left to right, Curly-Larry-Moe, as opposed to Moe-Larry-Curly in previous shorts, effectively giving Curly “top billing.” This change in the title card coincides with the refined and more familiar Columbia Pictures image of a torch-bearing woman, with a shimmering light instead of the primitive animation of light rays in the previous version. In addition, the “Columbia” theme now uses a more upbeat theme, featuring a brass introduction.

MALICE IN THE PALACE

Malice in the Palace is a 1949 short subject directed by Jules White starring American slapstick comedy team The Three Stooges (Moe Howard, Larry Fine and Shemp Howard). It is the 117th entry in the series released by Columbia Pictures starring the comedians, who released 190 shorts for the studio between 1934 and 1959.

Malice in the Palace was filmed on June 8–11, 1948. It was remade in 1956 as Rumpus in the Harem, using ample stock footage from the original. Footage was reused from Wee Wee Monsieur when the Stooges arrive at a palace disguised as Santa Clauses in a sleigh being pulled by a horse wearing reindeer antlers. 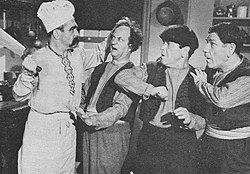 A thinner Curly (with a full head of hair and false handlebar mustache) as the Chef in Malice in the Palace. His scene was deleted from the final release.

According to The Three Stooges Journal, a part was written for Curly Howard after his brief cameo in 1947’s Hold That Lion!. The lobby card photo noticeably features a slim, mustachioed Curly as an angry chef. However, his illness caused his scenes to be cut (another story is that Moe Howard decided that “The Four Stooges” could not be sustained). A scene closely resembling the lobby card is in the finished film (with Hassan ben Sober in Curly’s stead); ultimately Larry assumed the role as the chef.

SING A SONG OF SIX PANTS

Sing a Song of Six Pants is a 1947 short subject directed by Jules White starring American slapstick comedy team The Three Stooges (Moe Howard, Larry Fine and Shemp Howard). It is the 102nd entry in the series released by Columbia Pictures starring the comedians.

There is an audio goof in the film during a scene when Moe Howard is making the pancakes in the pants presser, you can hear the director Jules White yelling “Cut! right as the camera dissolves to the next scene.

Brideless Groom is a 1947 short subject directed by Edward Bernds starring American slapstick comedy team The Three Stooges (Moe Howard, Larry Fine and Shemp Howard). It is the 101st entry in the series released by Columbia Pictures starring the comedians.

Brideless Groom was filmed from March 12–13, 1947. The plot theme of Brideless Groom is not unique, having been used in (among others) Buster Keaton‘s 1925 comedy Seven Chances (remade in 1999 as The Bachelor starring Chris O’Donnell). Writer Clyde Bruckman was also partially responsible for Seven Chances.

The film features longtime Stooges supporting player Emil Sitka‘s best-remembered line “Hold hands, you lovebirds!” (the line is actually engraved on Sitka’s headstone). Brideless Groom would be recycled in the second half of 1956‘s Husbands Beware. 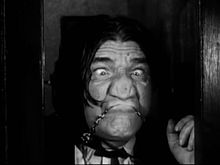 Brideless Groom features a sequence with Christine McIntyre who portrays Miss Hopkins, a woman whom Shemp actively pursues for his wife. Unfortunately, she mistakes him for her cousin Basil. After learning her mistake, she takes it out on poor Shemp by slapping him silly, then finally punching him through her door. During the filming of the scene, when Christine threw her punch, she leaned too far into it, and hit Shemp for real and broke his nose. This mistake was left in the film, and when watched in slow motion, Shemp can be seen falling down and opening his mouth like he was yelling in pain after the punch. Director Edward Bernds remembers getting McIntyre to give Shemp the blows:

In the story, Shemp had a few hours in which to get married if he wanted to inherit his uncle’s fortune. He called on Christine McIntyre, who mistook him for her cousin (Basil), took him to her apartment and greeted him with hugs and kisses. Then the real cousin phoned and she accused Shemp of kissing her, as it were, under false pretenses. At this point, she was supposed to slap Shemp around. Lady that she was, McIntyre couldn’t do it right; she dabbed at him daintily, afraid of hurting him. After a couple of bad takes Shemp pleaded with her. “Honey,” he said, “if you want to do me a favor, cut loose and do it right. A lot of half-hearted slaps hurt more than one good one. Give it to me, Chris, and let’s get it over with”. She got up her courage and, on the next take, let Shemp have it. It wound up as a whole series of slaps — the timing was beautiful; they rang out like pistol shots. Shemp was knocked into a chair, bounced up, met another ringing slap, fell down again, scrambled up, trying to explain, only to get another stinging slap. Then Chris delivered a haymaker — a right that knocked Shemp through the door. When the take was over, Shemp was groggy, really groggy. His nose was broken. Chris put her arms around him and apologized tearfully. “It’s alright, honey,” Shemp said painfully. “I said you should cut loose and you did. You sure as hell did!”