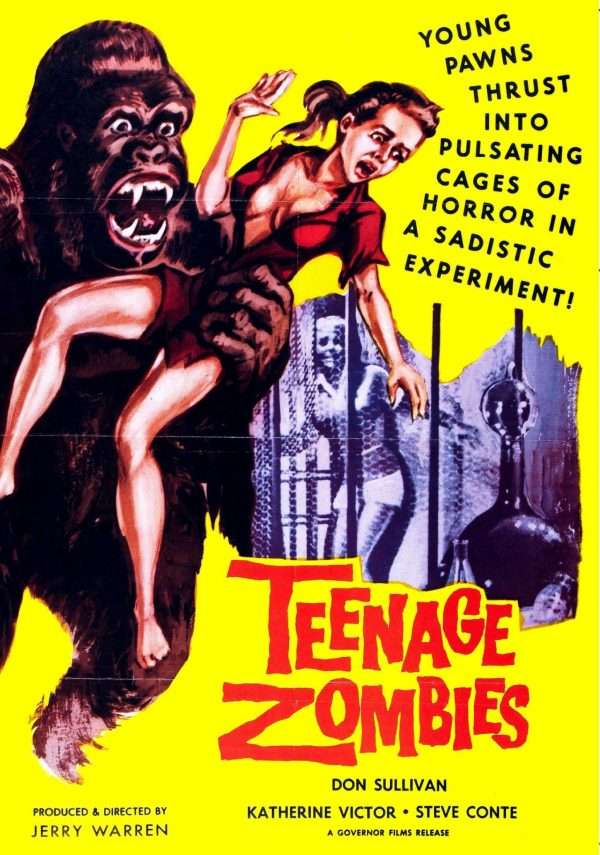 Teenage Zombies is a 1959 American science-fiction horror film written and directed by Jerry Warren and starring Katherine Victor, Don Sullivan, Chuck Niles, and Warren’s then-wife and production manager Brianne Murphy. Warren even wrote the screenplay for the film under his pen name Jacques Lecoutier (which he frequently misspelled in the credits). Film historian Bill Warren wrote “This dreadful, leaden and depressingly cheap film does have one unusual aspect… it was actually made by Jerry Warren in its entirety.”

While taking their boat out for some water-skiing, a quartet of teens named Reg (Don Sullivan), Skip (Paul Pepper), Julie (Mitzie Albertson), and Pam (Brianne Murphy) accidentally discover an island run by a mad scientist named Doctor Myra (Katherine Victor) who, backed by foreign agents from “the East”, intends to turn everyone in the United States into mindlessly obedient zombies.

The teenagers are captured by the hulking, bearded zombie Ivan (Chuck Niles) and imprisoned in cages down in Myra’s basement, but the boys manage to escape, planning to find a way off the island and then come back to rescue the girls. When a couple of their young friends arrive with the local sheriff to save them, he turns out to be in league with Myra and has been supplying her with victims for her experiments.

A complicated fight scene serves as the climax, in which a previously zombified gorilla arrives just in time to attack Myra’s henchmen and allow the teens to escape. They find Myra attempting to steal their boat and manage to capture her for the police. After they are safely back on the mainland and the proper authorities informed, it is implied that the teens will receive a reward for discovering the island and will have an audience with the President of the United States.

The film is about a group of teenagers who are marooned on an island inhabited by a female mad scientist, her pet gorilla and a zombie slave named Ivan. She traps the kids in a cage down in her laboratory, plotting to use them as subjects for her zombie-making experimentation, so she can test out a drug she is working on for an unnamed foreign nation.

Although the film’s credits include a 1957 copyright statement for G.B.M. Productions, the film was never registered for copyright.