Mary Ryan enlists the help of a detective, Jack Craig, to find her missing twin sister Vicky. They follow her trail to the New Orleans swamps where they encounter voodoo priestess Olivier and her zombie henchman (Bill Pearl)

William Arnold Pearl (born October 31, 1930) is an American retired professional bodybuilder and athlete. During the 1950s and 60s, he won many titles and awards, including winning the Mr. Universe contest five times, and was named “World’s Best-Built Man of the Century.” He later became an expert trainer and author on bodybuilding. 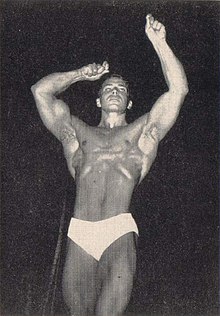 Pearl in competition in the 1953 Mr. America contest.

Pearl was born in Prineville, Oregon. While enlisted in the US Navy, stationed at San Diego Naval Air Station, he worked out at Leo Stern’s Gym (which still operates as of 2021). Leo Stern, himself a champion bodybuilder, coached Pearl in his training and encouraged him to compete. In 1952, he competed in two local contests (3rd place in the Mr San Diego contest,followed by winning his first contest, Mr Oceanside. In 1953, he competed in 4 higher-level contests, and won them all. This included being crowned ‘Mr America’ and ‘Mr Universe’.

Pearl competed six times in two years, but then only competed twice in 1956, and then only once in the years 1961, 1967, and 1971. In all, he only competed in 11 contests, winning the overall in 9 of them. Of all the professional contests between 1956-1971, only Jack Dellinger defeated Pearl (1956 NABBA Pro Mr Universe). During that 18 year span, no bodybuilder was more successful. Even with his final Mr Universe win (as the oldest contestant, age 41), Pearl defeated Frank Zane,Reg Park, Dave Draper and Sergio Oliva. In addition to competing, Pearl gave posing and strongman exhibitions all around the world. His strongman act included blowing up hot water bottles, bending tent spikes, breaking chains, and tearing up license plates. Pearl also ran two Bill Pearl gyms in California.

Pearl is the author of the exercise book, Getting Stronger: Weight Training for Men and Women, which has sold over 350,000 copies in the United States and has been translated into four other languages, including Chinese. His book, Keys To The INNER Universe contains 1,500 weight-training exercises, weighs five pounds, and has sold over 60,000 copies. Pearl had his own monthly question-and-answer column called “Pearl of the Universe” in the bodybuilding magazine MuscleMag International as well as one in Muscle Builder (later Muscle & Fitness) magazine, titled “Wisdom of Pearl” in the 1970s and 1980s. In 2003 with co-author Kim Shott, Pearl published his autobiography, Beyond the Universe: The Bill Pearl Story.

During the 1980s, Pearl served as a mentor, trainer, and training partner to many of the top professionals that were still competing, including Mr. Olympia, Chris Dickerson. In 2004, Pearl was awarded the Arnold Schwarzenegger Classic Lifetime Achievement Award for significantly impacting the world of bodybuilding. In November 2004, Pearl acted as Master of Ceremonies for Sri Chinmoy’s Weightlifting celebration, in New York. In 2011 Pearl appeared in the documentary Challenging Impossibility describing when he hosted the 2004 strength exhibition by spiritual teacher and peace advocate Sri Chinmoy. The film was an Official Selection of the 2011 Tribeca Film Festival. As of 2009, Pearl lives in Phoenix, Oregon.

Pearl became a vegetarian at age 39. His diet is lacto-ovo vegetarian, which means he eats eggs and dairy products.[6] Pearl mentions the benefits of vegetarian bodybuilding in his book Getting Stronger: Weight Training for Sports, published in 2005.